Ablums…no.. albums. Yeah, albums. I hate albums. Especially if they do not belong to me.

I hate them so much, that I have even stopped visiting my friends and relatives. Here is what happened when I last visited a friend`s place. 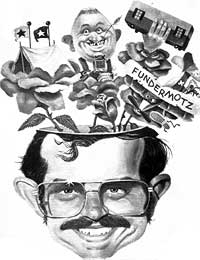 It all started because Prakash, my friend wanted to take a bath before we went for a concert. After he slammed the bathroom door shut, I turned towards the India Today lying around and buried myself deep into it. I still cannot fathom what made Prakash`s mother to think that I was bored. She walked up to me, with something that seemed like a pillow from afar, and a treatise on Darwin`s Theory of Evolution from near.

“You have not seen Sonal`s marriage photographs have you?”

Sonal was Prakah`s sister. I hated her. One she was not pretty, and two she hated me coz she thought I was the reason behind her brother`s smoking.

Even before I could lie that I had seen it before, and liked it, she was beside me on the couch. She was excited and understandably so. Sonal was her only daughter and her marriage was probably her biggest single achievement in life. But why the &^%$ did she think I would be interested, I would never know.

“Yeah. In fact, I am looking for some girl like Sonal,” I said. I got a cold stare, but the torture went one.

Pointing to a picture of a man and woman who looked like they were straight out of X-Files, she said: “That is her in-laws. Nice people. They even bought me a saree.”

“Ho..you should see the color of the saree. It is amazing. You don`t get these colors south of Baroda. Will show you the saree next time, I washed it in the morning and it might be wet.”

I let out a sigh. It was a close shave.

“Or would you want to come to the terrace?”

“No aunty, that is fine. Prakash has anyways come out,” I blurted out in sheer desperation. He was my ticket to freedom, and I was going to use him as a human shield wherever necessary.

By now, Prakash had come out. Sort of gift-wrapped in wet towel. He saw me looking thro` the album, and shouted at the top of his voice: “Mama, show him the one where I am wearing the blue suit. Ohh…Jams that`s a killer man.”

I did not make it to the concert. Besides being late, I did not want to go to a concert in blood-stained clothes. If only I had controlled myself….