Wow! Rekha and I are now proud participants of a revolution initiated by Karl Benz way back in 1885. Yes! We are proud owners of a car – Suzuki Swift. At least, I am proud of it. Rekha had wanted a Mercedes Benz S-Class. As you can see her tastes are so much more better that mine. It also shows on whom we chose has partners for life – she gets a dude with a capital ‘D` while I get her!

I wonder if you have noticed yet…but my last visit to my own Blog was on Wednesday evening. The reason for this phase of inactivity is the lack of internet connection in my car. Though I did manage to get out of the car once in the last two days – when I had to remove a bicyclewala stuck on to our car`s front grill. It did feel like removing a piece of food from one`s teeth after a heavy meal. 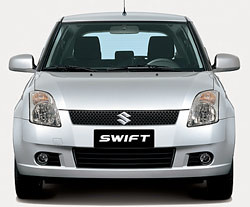 Both of us were at the showroom by 5 p.m. and while I finished the paperwork, Rekha kept an eye our chauffeur. Oops…almost forgot. We have recruited a chauffeur who will handle the most difficult part of owning a car – driving. Khivraj Agency, Chennai delivered the baby (that`s how we now address the car at home) at 5.45 p.m. on Thursday. As I was saying, we have hired a chauffeur because I am a driving school drop out. This is the biggest advantage of dealing with the Rajans – we are honest people and accept the truth even if it means recruiting a chauffeur for a huge compensation.

After his first day at work, the chauffeur was all praise for us. When we let him go at 2 a.m. he muttered something which when roughly translated into English meant: “What a couple. I have never met a family like yours that has managed to buy a car. Surprising.” Rekha says he also said something about somebody stealing a car and/or winning it in a game show.

On Friday, Rekha took the car to her office. If you had seen me opening the door for her when she got in and the driver opening it for her when she got down at the Cognizant office, you would have thought she didn`t know to open car doors. Apparently, she knows. Didn`t somebody once say ‘when a husband opens the door for his wife, either the car is new or his wife is new`?

When I spoke to the driver at the end of his second day at work, he said: “Sir, what are you guys so happy about? Did you just get pardoned by the President? I have been driving for 20 years and am yet to see a couple that sacrifices a goat at the village temple after buying a car.”

I was least concerned about his accusations….afterall, everything he said was pardonable as long as he called me ‘Sir`. It makes me feel like Bertie Wooster and he my Jeeves (those who read PG Wodehouse will understand better).

On Saturday morning we decided to go to Hanif`s house. He has been a friend of mine from my Indian Express days, and if there was anybody who deserved to see my car first…it was him. But he didn`t think so. When I called him and said we would be at his house for lunch and he could also see our car, he thought for a while and said he was in Bangalore and won`t be back for a month.

Rajah, a senior manager in a pharmaceutical company was also not in town. When I told him about the lunch he said: “Machan, I am in Coimbatore. In my job I get to travel at work only once in three years and this happened to be the day.” I didn`t pursue.

Even as Rekha called up her friend Sheela, I prayed that our self-imposed invitation gets refused. Thank God, Sheela turned us down…otherwise I would have ended up defending my set of friends.